I just got confirmation that I’ve been given a 30 minute speaking slot at EthCC in Paris in March to talk about Etherean!! As well as Cryptopia, the book I’m working on. Booyah! This will be the first official talk on these topics. What would folks like to hear about / discuss?

Here’s an early draft of the talk. I probably need to cut around half of the material. You can also think of this as a very early, high-level draft for the book, Cryptopia. Would love feedback!

This all looks really good, hope you don’t have to cut much due to time restraints!

From my point of view: skip parts about Brexit, Russia/USA/China, rather keep it high-lvl about nation states. I would even skip the “Rise of populism” part. You can prove ineffectiveness of a nation state even w/o such concrete examples.

I am not sure about Governance/Politics part as well, IMHO this could be a lecture itself as well.

Also, to keep the topic “tighter”, I wouldn’t dive too deeply into Self-sovereignty, I consider it to be too complex subject.

Too sorry I can’t participate! I would really love to hear that. This seems like really my cup of coffee :))

Thanks for the great feedback guys! I’m pretty sure everything will be recorded and livestreamed. I don’t see a link yet, but watch https://ethcc.io/.

@lane I just got a chance to go through your ethcc talk, it was great! Will be highly recommending it

It’s definitely not just you thinking the Facebook future is appearing the most likely without change… example from today in CNBC Crypto:

“Challenges remain. Facebook needs to demonstrate a value proposition for users ‘above what is available today in payments’ and build trust after its laundry list of issues in 2018, Sandler said. Global payments systems also tend to bring more regulatory scrutiny.”

“But if the stable coin is successful, Sandler said, he sees no reason why Facebook couldn’t get into consumer lending, remittance and physical payments ‘eventually.’”

I don’t want to jump over you to post the link here in case you wanted to do a post about it, but I figured since you tweeted about it it’s fair game

Retweeted it because I knew it was going to be good, but will share it more now haha. Really nice work on the presentation!

btw, do you want to start a thread for a meetup at rxc or should i?

Thanks! Here’s the recording - they got the videos up very quickly!

do you want to start a thread for a meetup at rxc or should i?

I love the idea. Create a thread for it! We can throw it up on kickback.events like we did in Paris

You seem to put more emphasis on negative sides of Web 2.0, and I understand why, but I believe it’s worth noticing that Facebook and other global companies are the major force of globalization and show the limits of nation-state powers. They evade taxes, are rather reluctant when it comes to align with local laws (but on the other hand they set its own rules and impose it globally). But this only highlights that something is wrong with nation-state system, that in reality we are not living under this system fully, because our (cyber)world is divided between other entities (FB, Google and so on).

Of course there’s also another thing: FB, Google, Tencent are based in some “super power” countries and they are an important tool for those countries to influence other.

I agree totally. Thanks for pointing this out. I’d just add/rephrase, “… have been the major force of globalization over the past few decades.” I’m not sure it was always this way.

I have no doubt that if the FAANGs and BATs of the world have their way, we will live in a Snowcrash-esque libertopia where absolutely everything is privatized. The question I’m asking is, Is this the future we want? Is it the world we want to live in? Or is there some better option?

Lanier speaks to this in Who Owns the Future?: 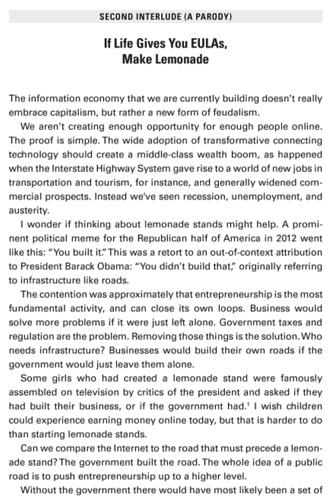 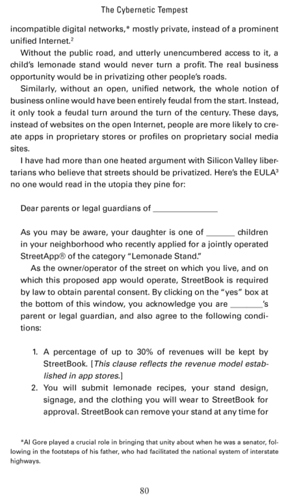 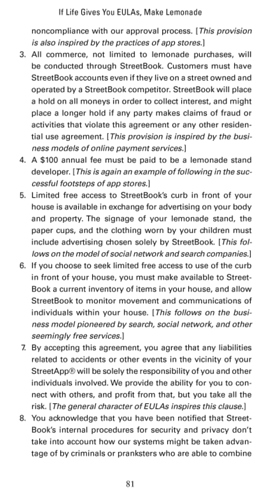 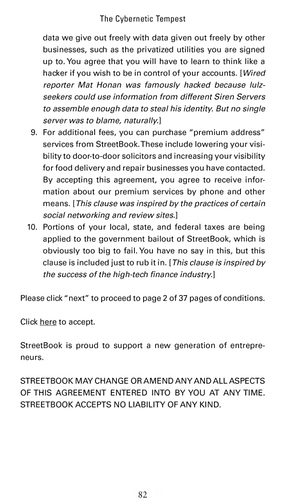 Of course it’s not what I want, and I’ve been trying to alarm people about it since 2009… without much success. I witnessed the demise of Web 2.0 dream which was also about decentralization (hence I watched Harry Halpin’s talk in Berlin with tears in my eyes, literally)

This passage from Lanier is supposed to be a parody, but I believe that shopping malls are using very similar agreements with their “tenants”.

Now we have bit better tools to build better future. Still it’s hard to be optimistic, because such fundamental shift never happened without bloodshed (French Revolution is first which comes to mind).