I’ve been thinking lately about what political decentralization means. Could the following be a way to begin thinking mathematically about the ideal “decentralized” political system in our online (and maybe eventually, real-world) societies? 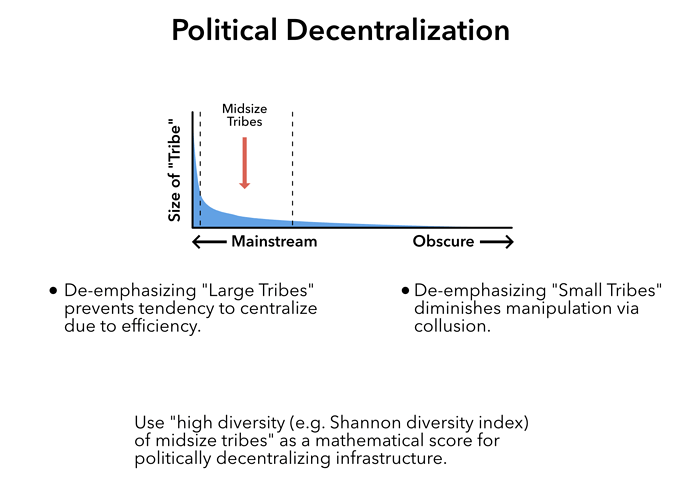 Imagine creating a politically decentralized network that is metastable: i.e. over long periods of time (e.g. centuries), it does not drift towards the danger zones and efficiencies that come from centralization (and in some extremes, tyranny) nor towards the manipulations that come from small groups of conspirators (leading to corruption–i.e. the hijacking of resources meant for the public good for the gain of one or more smaller networks).

Let’s imagine a future in which decentralized services are plentiful: many blockchains, many decentralized file storage systems, many ways to represent identity, many ways to harness decentralized compute services, etc. etc. In this future, there could emerge a “node operator” role in society–someone who is willing to host these redundant, resilient, decentralized services in exchange for payment. It’s a new job description: your role is to provide hosted software, as well as large disk & compute resources, to the global “human-machine hybrid society”, and manage the software services that bring you the most profit. How do we ensure that only the node operators who are contributing to this “politically decentralized” future will thrive?

Let’s imagine also that in this future, we’ve succeeded in creating self-sovereign identity (SSI). Everyone has the right and ability to represent themselves to others, with their own sovereign data. We have cryptographic proofs that we can give each other to attest to various things about each other–I can give you a credential proving you’re a part of “@des’s club” or @lane could issue credentials to each of us saying we are each “Ethereans,” and we could go on to use the credential provided by @lane elsewhere. Or the government could issue a driver’s license to you, electronically, and you could use this credential to prove your age or personhood, etc.

In a future with node operators and credentials, we can create incentives outside of the blockchain itself–incentives that rely on natural human social structures, not just single-dimensional staked token value. (It’s easy calculate whether it’s worth it to let go of some money, it’s generally harder to betray people we share identity with). So, given then we will be able, what should we incentivize?

It seems to me that there has to be a deliberate measure of both tribal size & Shannon diversity in order to reward participation of individuals in the network whose traits (relative to others’ traits) benefit the whole.

If we just allow anyone with the cheapest hardware and electricity costs to participate, for example, we fail to create a resilient network because the system would not be metastable: it would drift toward individuals or companies whose capital allows them to buy the largest number of cheap compute nodes & colocated network services. The disequilibrium leans towards “efficiency at all costs.” As I posted in another recent thread, the infrastructure of cheap electricity distributed throughout the world also causes blockchain (or at least, PoW blockchains) to recapitulate the geopolitical status quo. This isn’t what we want.

But we don’t want our systems to be inefficient, either. We don’t want maximal diversity. To the extent that it does not disrupt higher values like privacy, dignity, fairness, resilience, etc., we would like things to be fast, cheap.

Aside from tribal affiliations, traits that could also provide value to the network include where the node is hosted (in your home, vs. Amazon AWS–the former is more valuable, the latter is cheaper but probably over-represented), what type of hardware the node is running on (e.g. Mac vs. Linux vs. PC), and what country it’s hosted in. There would need to be a certification process that allows these traits to be surfaced and issued via self-sovereign identity credentials. (Perhaps nodes themselves can be considered a pseudo-individual with credentials that diverge from their owners’.)

Is this headed in the right direction?